November 11, 2022, FTX, a $32 billion cryptocurrency exchange company that many believed would “change the world,” filed for bankruptcy. This news shook the crypto and financial communities, compelling many to debate the future of the crypto market and its platforms.

How did FTX collapse?

You could say that FTX’s collapse began before the news broke, but here’s a summary of events as The New York Times and ABC News details:

In early November, CoinDesk, a crypto publication, broke the news on a leaked document from FTX. The balance sheet showed that the hedge fund run by Sam Bankman-Fried (SBF), Alameda Research, held a substantial amount of FTT tokens. In short, SBF had set up Alameda (his trading firm) and FTX (his exchange firm) in such a way that if one unit experienced trouble, such as dropping cryptocurrency prices, the other experienced it, too.

By the way, FTT is used for various functions, including traders’ payment of operation fees. Also, by the way, Changpeng Zhao, Binance’s Chief Executive, sold his stake in FTX to SBF in 2021, partially with FTT. So, “due to recent revelations,” Binance (Zhao) announced on November 6, 2022, that it would sell its FTT tokens.

Traders responded; they hurried to pull funds out of FTX out of fear, and FTT’s price fell. Meanwhile, FTX processed withdrawal requests over three days, amounting to an estimated $6 billion. The liquidity crunch was upon it.

Then, on November 8, Binance said it would bail out FTX. But on November 9, Binance backtracked and announced in a Tweet that it would not “as a result of corporate due diligence,” while also citing regulatory investigations and reports of mishandled funds.

The next day, November 10, the Securities Commission of the Bahamas froze FTX’s assets, citing the public statement about potentially “mishandled” and “mismanaged” customer funds. On November 11, FTX filed for Chapter 11 bankruptcy protections, and SBF resigned as CEO. John J. Ray III—famously known as the CEO who headed the infamously known energy company, Enron, through its collapse in the 2000s—replaced SBF on November 17.

Today, FTX faces federal investigation for securities laws violations based on a report by The Wall Street Journal regarding FTX lending customer deposits to Alameda Research for liabilities, of which the company’s top executives were aware. Investors have suffered loss, traders have suffered loss, and the greater crypto community and regulators are asking questions.

News about FTX’s collapse generated tons of web data for us to scour. With this data, here’s what we aimed to find out:

Web public sentiment for FTX and SBF was consistently positive until Q1 of 2022. As mentions volume increased, their sentiment polarity decreased (Figure 1). The mentions spike for both in November when CoinDesk broke the news. Likewise, polarity dips into the negative range for both. 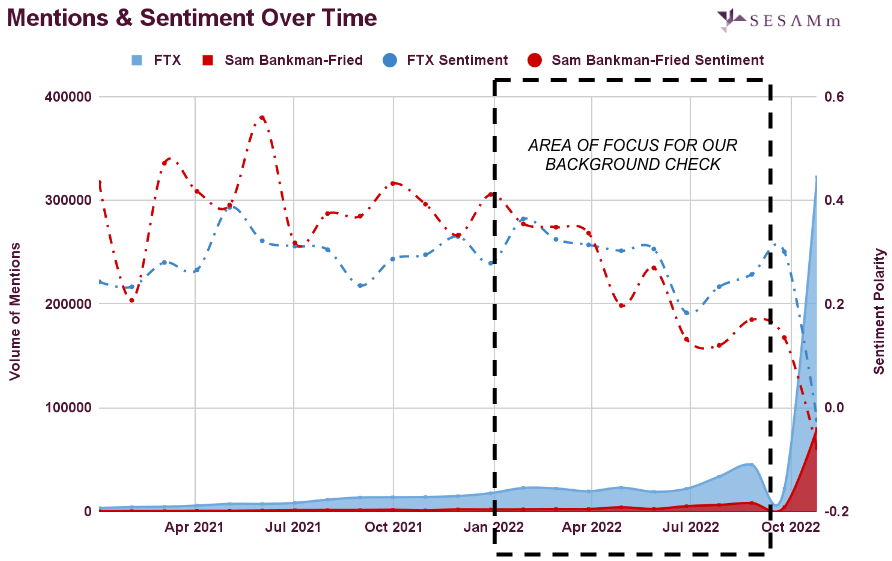 Figure 1: FTX and SBF mentions and sentiment over time.

Looking closer at Q1 (Figure 2), we find that mentions affecting sentiment increased for FTX and SBF during this period. What are the mentions about, and why did they affect polarity negatively? 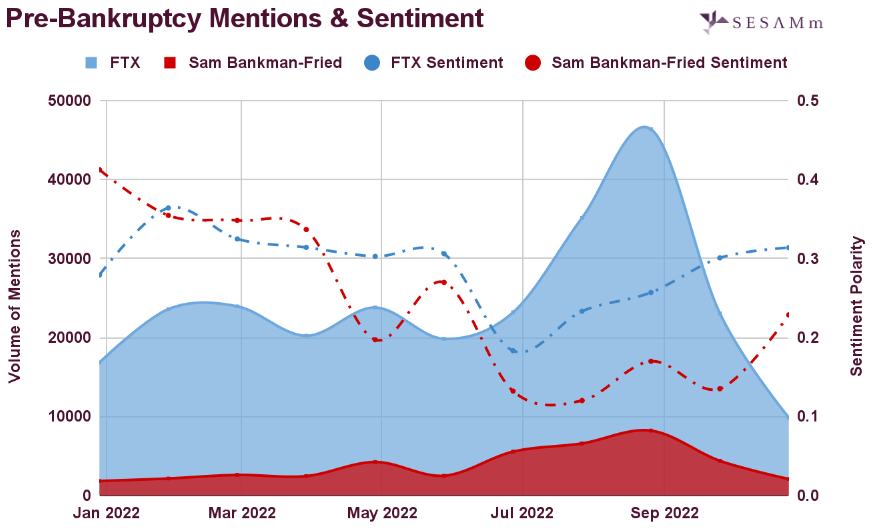 It turns out that SBF is linked to other keywords—we call these co-mentions—and between January 2022 and November 2022, SBF/withdrawal co-mentions (Figure 3) spiked in July when SBF defended Terra Luna’s founder, who was accused of peddling a Ponzi scheme. 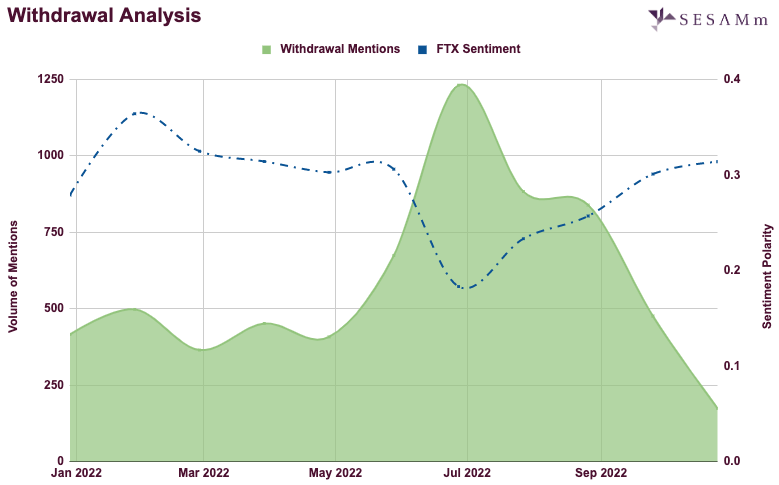 If withdrawal co-mentions brought up possible reasons why SBF and FTX experienced dips in sentiment, what other co-mentions could give us more insight? How about donations, SEC, and U.S. elections? 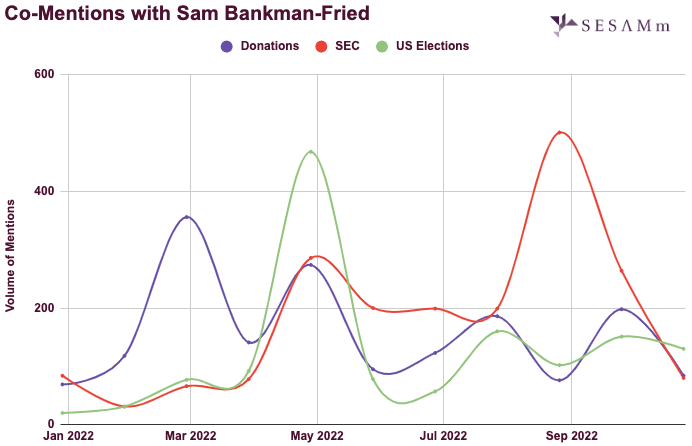 Bankman-Fried has exhibited patterns of making political statements, attempting to influence crypto regulations, and donating funds before elections. It should be no surprise that SBF’s co-mentions with C-level unethical practices yield additional data.

Corporate governance stands out when evaluating SBF’s ESG risks, but his social risks are nothing to ignore either. 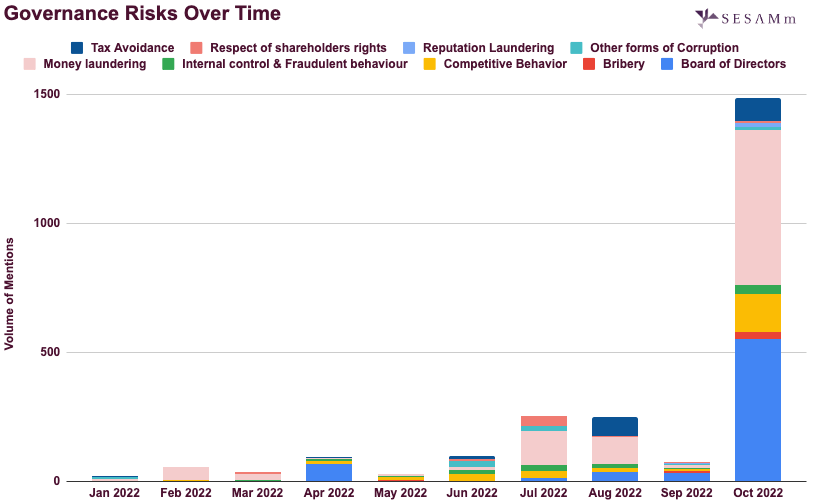 Two areas of governance risks to note are money laundering and board of directors (Figure 5). Money laundering as a co-mention has been an issue as early as February 2022, but it became a bigger issue in October. These risks may be popping up due to allegations of manipulating the price of the APT token and a securities violations probe.

If you’ve read this far, you by now get an impression of FTX and SBF, from mention volume to sentiment analysis and ESG risk. But how did FTX’s collapse affect the overall cryptocurrency market? Let’s find out.

In comparing the sentiment polarities for FTX and the crypto market from January 2021 through November 2022 (Figure 6), the sentiment for crypto remains relatively steady despite FTX’s sentiment taking a hit. 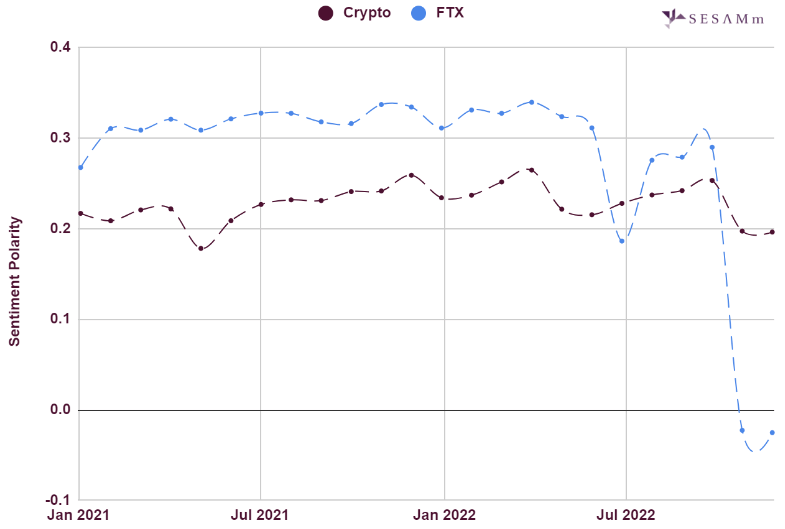 Figure 6: Effect of FTX collapse on the crypto market.

When comparing other cryptocurrency exchanges to FTX (Figure 7), sentiment polarity for them is hardly affected, except Binance, because of its connection with FTX. Oddly enough, eToro experienced a boost in sentiment, possibly because of its core values around openness and transparency, the fact that they’ve been around since 2007, its early compliance with regulations (i.e., AMF, FCA, ASIC, BaFin, and ACPR), and that it also proposes investing in stocks and ETFs, a contrast to most other crypto market exchanges. Bitfinex has its own issues, so its dip in sentiment might not be correlated. 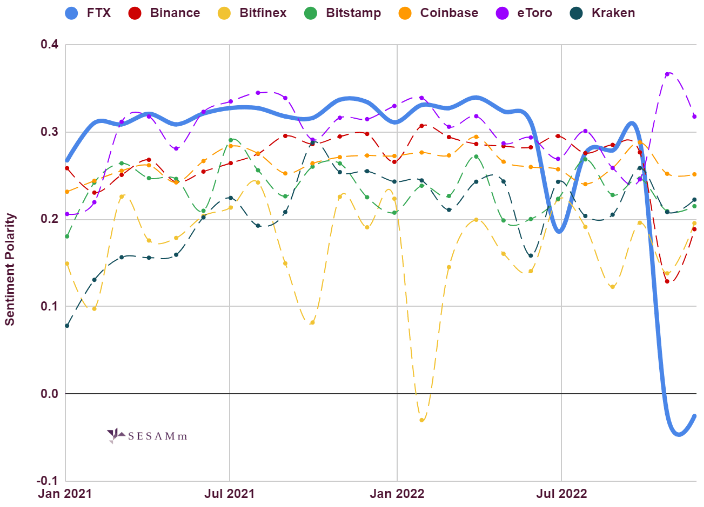 At this time, FTX’s ESG risks based on the mention volume are only surpassed by Bitfinex (Figure 8), which its risks are based on many other reasons we won’t get into in this article. 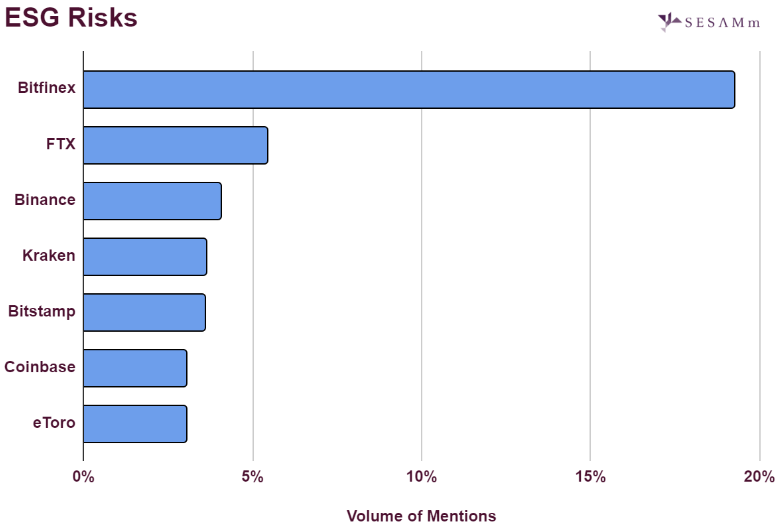 Note: To see a comparison chart of social and governance risks for each exchange, contact a SESAMm representative today.

FTX’s collapse also affected sentiment around the centralized vs. decentralized debate. Since October 2022, sentiment for centralized exchange platforms, such as FTX and its competitors, has fallen (Figure 9). 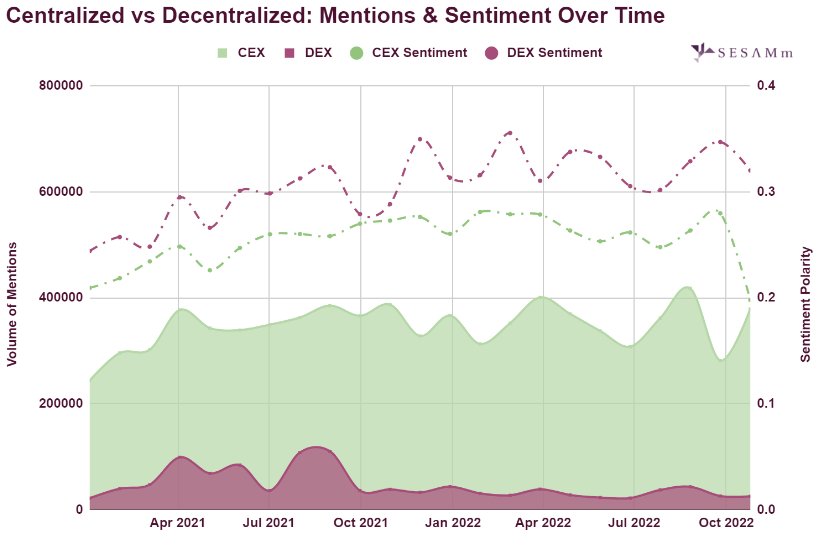 Figure 9: Centralized vs. decentralized mentions and sentiment over time.

Likewise, the mention volume for self-custody has more than doubled in the last couple of months (Figure 10). Although centralized platforms offer quicker and easier access to crypto trading, traders are considering complex but more secure options such as crypto wallets and keys because, like banks, centralized exchanges can do what they will with cryptocurrency while it’s in their possession. With self-custody, owners are in control. 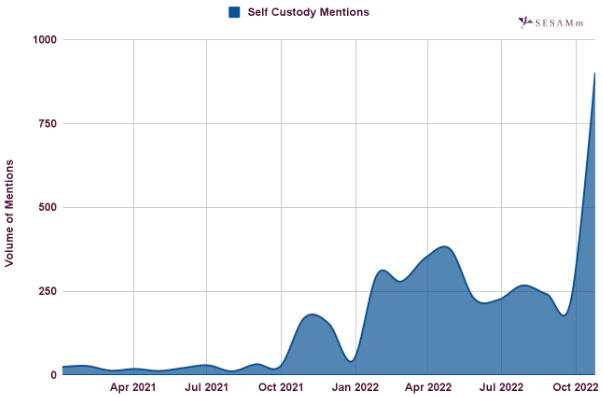 FTX not the first exchange collapse

Believe it or not, FTX was not the first crypto exchange to collapse. In 2014, Mt. Gox—the biggest crypto exchange at the time—lost half a billion dollars worth of Bitcoin due to a hack. How did Mt. Gox’s collapse affect sentiment for the crypto market then? The short answer is: It didn’t. 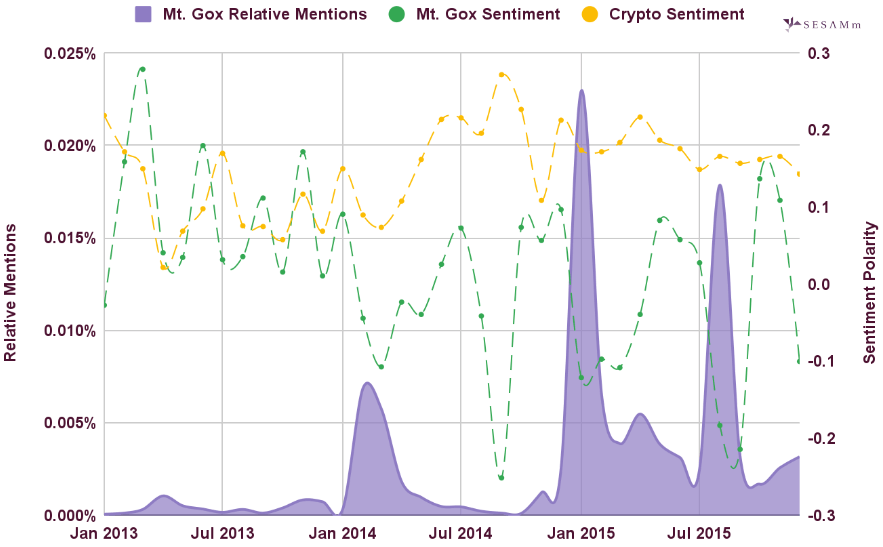 Is FTX’s collapse a warning for investors?

Our analysis is that investors should treat cryptocurrency exchanges like any investment opportunity. Do your due diligence and monitor your portfolio with tools like SESAMm’s TextReveal®.

As for the cryptocurrency market, data shows that sentiment for it remains level and positive. We speculate that cryptocurrency and centralized exchanges are here to stay. However, based on historical data and current news, we suspect conversations about crypto regulations to increase.

For a deeper analysis of FTX’s collapse and access to all charts and supportive-article links, reach out to a representative today. 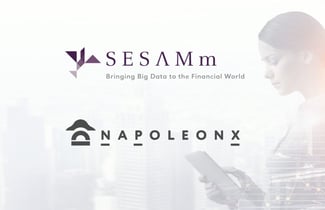 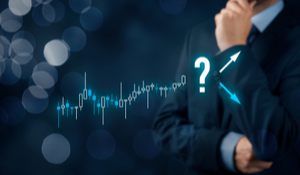