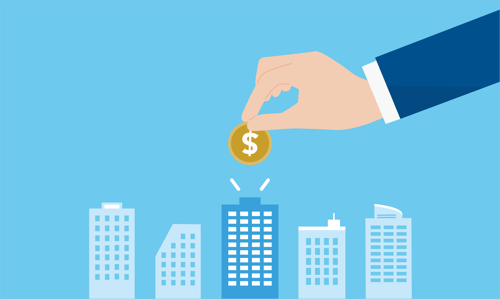 Why did a16z invest in Flow and, by proxy, Adam Neumann?

In his blog post about “Investing in Flow,” Andreessen acknowledges the U.S. housing crisis in the first sentence, and here’s what he has to say about Neumann: “Adam is a visionary leader who revolutionized the second largest asset class in the world—commercial real estate—by bringing community and brand to an industry in which neither existed before.” Andreessen continues, “[I]t’s often underappreciated that only one person has fundamentally redesigned the office experience and led a paradigm-changing global company in the process.”

So that gives us a clue as to what Andreessen thinks. But what does the public web have to say, and what is its overall sentiment?

In this edition of Alternative Data Trends, we dig into public web data before, during, and after a16z announced that it would fund Flow. Does the public web agree with Andreesen’s view? If not, how does it differ? And how can this information inform an investor and other VC firms? 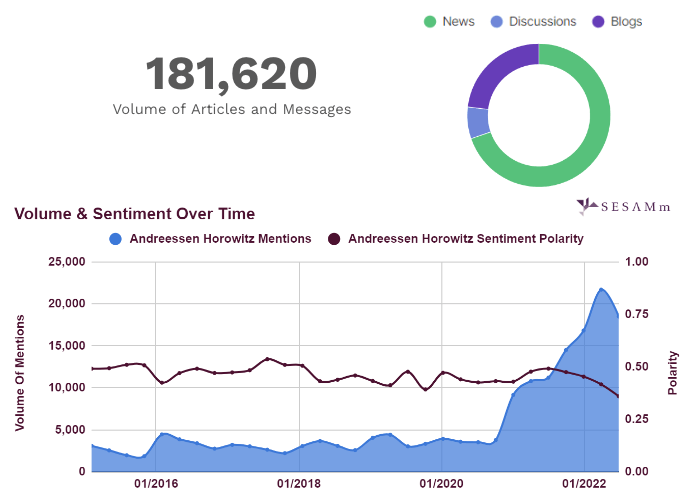 TextReveal® uncovered 181,620 articles and messages from SESAMm’s data lake about Andreessen Horowitz (Figure 1). Mention volume remains consistent until late 2020, at which time a16z invests in a bunch of new companies and startups, such as:

a16z also focused on the NFT market and, as a result, launched the world’s biggest crypto-fund valued at $2.2 Billion in June 2021. Moreover, Andreessen Horowitz launched its own media property, Future.com, in mid-2021.

Andreessen Horowitz web mentions further spike after it doubles down, announcing $4.5B crypto fund IV in May 2022. Additional news increased mention volume because of its investment in Neumann’s new startups, Flowcarbon and Flow.

Sentiment toward a16z remained relatively stable over time with only minor dips until mid-2021, when it began falling, a trend driven by mentions of Flow investments news, the Uniswap related lawsuit, and suspected CoinSwitch Forex law violations (Figure 2).

Why was Flow affecting a16z’s polarity so much?

Despite Andreessen’s reasons for giving Flow and Neumann a chance, the public’s opinion seems to disagree, leaning toward a negative sentiment (Figure 3). Overall, the public doesn’t seem to trust that Neumann is worth a second chance and that his choices are beyond forgiving. Moreover, the public criticizes a16z’s choice to overlook women and people of color. This The Guardian article highlights tweets of these differences in opinion:

a16z: How can we trust you after WeWork?

THIS IS DISGUSTING.@a16z’s largest check going to a (straight white male) founder of one of the most toxic companies we’ve seen. Firms like this perpetuate over and over again a traditional system that favors a small, homogenous set of founders. https://t.co/PLMKGIULqC

In summary, TextReveal’s web data analysis tells us that it’s essential to keep an eye on the latent ESG risks this investment could bring to a16z’s portfolio, particularly on the social side.

Andreessen Horowitz, from an ESG perspective

From a mention volume perspective, a16z’s ESG initiative numbers remain stable (Figure 4). Andreessen Horowitz has a good share of ESG initiatives shares with the highest percentage for governance driven by partnerships and collaborations, followed by the environmental aspect that has been increasing over the last two years.

ESG risks, from a portfolio perspective

Figures 5 and 6 cover 160 companies in Andreessen Horowitz’s portfolio in the venture and growth stage. Overall, a16z’s portfolio represents a lower ESG risk (<15%) over time, except for the occasional moderately higher ESG risks score (<35%) indicated by two prominent spikes, one at the end of 2016 (Q4) and the second at the beginning of the year 2020 during the pandemic (Q1). The first spike is mainly a governance risk related to Soylent’s products being recalled and supply-chain-shortage risks. The spike is also caused by another top executive resigning from Magic Leap. In contrast, the second spike is a social risk driven by Instacart’s employees’ strike upon working conditions and safety concerns during the Covid-19 pandemic. 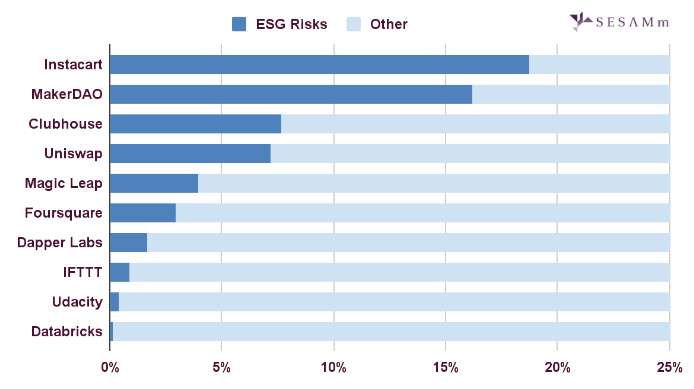 Figure 7: A deeper look into the top companies in a16z’s portfolio generating mention volumes shows Instacart and MakerDAO in the moderate risk range. In contrast, the others are low to very low in risk in comparison.

Does the public’s view of a16z’s investment of Flow have merit?

Looking at Andreessen Horowitz’s company and portfolio through the lens of web data, it is, if anything, consistent with its ESG initiatives and has experienced very few controversies. Should investors ignore the potential red flags that come with Flow and Adam Neumann? Of course not. But they should feel assured that a16z has exhibited a pattern of making sound investments. For example, if we compare the firm’s SDG initiatives to those in its portfolio (Figure 8), they are almost identical. 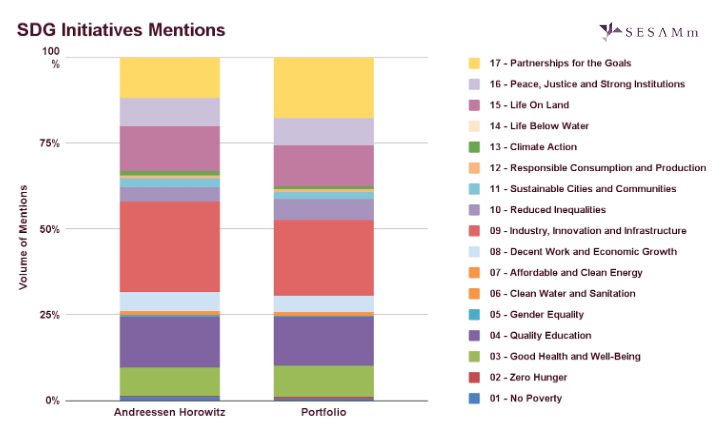 Figure 8: Andreessen Horowitz portfolio companies are focusing on the Sustainable Development Goals with specific attention toward goal 9: Industry, Innovation, and Infrastructure and Goal 17: Partnerships for the Goals, followed by Goal 4: Quality Education and Goal 15: Life On Land.

It’s possible that maybe Marc Andreessen and a16z et al. see something in Flow that the general public does not. After all, it’s why they’re a successful venture capital firm that consistently “backs bold entrepreneurs building the future through technology,” controversies and all.

TextReveal’s web data analysis of over five million public and private companies is essential for keeping tabs on ESG investment risks. For example, ESG Alerts provides a better way to research and monitor your investment portfolio. To learn more about how you can analyze web data or to request a demo, reach out to one of our representatives.

TextReveal ESG Alerts, a better way to research and monitor your investment portfolio SESAMm’s first steps in the US 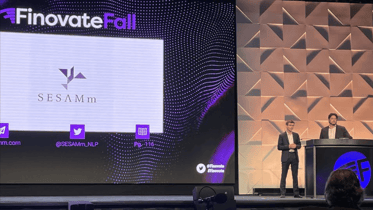